Inicio
Blog
China's Marine Corps has doubled in size since 2017, and it would be a key part of any attempt to invade Taiwan 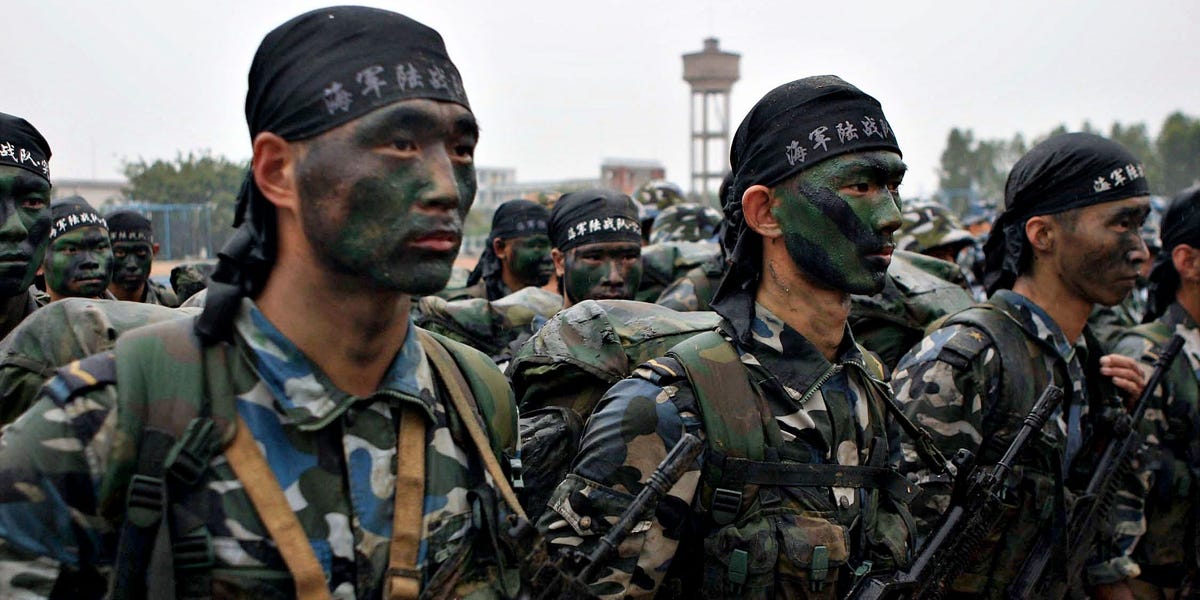 China’s Marine Corps has doubled in size since 2017, and it would be a key part of any attempt to invade Taiwan

China’s Marines would be key in a Taiwan War: Tensions between China, the US, and Taiwan have risen following a visit by US House Speaker Nancy Pelosi to the self-governing island. Renewed attention has fallen on the question of China’s ability to seize the island in a D-Day-like amphibious invasion.

Rampant speculation that a surprise invasion could occur any day now is off-base. The time and effort needed to assemble an adequate force would make preparations quite obvious, as they were in the lead-up to Russia’s invasion of Ukraine.

Nonetheless, China’s military has unquestionably devoted much effort to improving its capability to undertake such a risky and costly campaign if ordered to.

One important element of those plans is the People’s Liberation Army Navy Marine Corps, or PLANMC, which has more than doubled in size since 2017. This article will review key findings from a study by Connor Kennedy for the China Maritime Studies Institute regarding the organization, mission, and methods of China’s revamped Marine Corps as well as how that related to Taiwan.

The death and rebirth of China’s Marine Corps

The PLANMC was formed from the Army’s 85th Division in May 1952. A company of this division saw action repelling a Nationalist landing force from Dongshan island in 1953.

This corps was eventually disbanded, but after island skirmishes with Vietnam, two new Marine brigades were formed, one in 1980 and another in 1998. These totaled 12,000 personnel, stationed mostly at Zhanjiang to support the South China Sea Fleet in anti-piracy and island garrison missions.

In 2017, as part of a sweeping reorganization of the Chinese military, the PLANMC was expanded to comprise more than 30,000 personnel in six marine brigades. These were supported by new Aviation and Special Forces brigades.

However, even this expanded Marine Corps only supplements the Ground Force’s six amphibious combined-arms brigades, which field twice as many heavy mechanized battalions, and more fire support. (You can read more about the Ground Forces’ amphibious units in this study by People’s Liberation Army expert Dennis Blasko.)

The Navy Marine brigades focus on a more diverse set of skills for varied missions, including anti-piracy and crisis-response roles across the Pacific and Indian oceans. For example, a marine battalion is stationed at China’s only oversea military base in Djibouti, and this will likely feature in future People’s Liberation Army Navy, or PLAN, amphibious strike groups built around Type 071 and 075 amphibious carriers.

The organization of China’s Marines

The new standard PLANMC brigade has two Amphibious Mechanized battalions, each with 56 ZBD-05 tracked amphibious carriers and ZTD-5 assault guns that can swim from ship to shore at an extraordinary 18 mph. (For comparison, US Marine Corps AAV-7 carriers max out at 8 mph on water.)

The ZBDs are armed with rapid-firing 30-mm cannons and two HJ-73C anti-tank missiles — they can carry eight infantrymen. The ZTD-5s have 105 mm guns effective against tanks and strongpoints.

Each battalion also has a fire support company, a reconnaissance platoon, and engineering, air defense, and repair sections.

Each Marine brigade also has a Light Amphibious Mechanized Battalion using eight-wheeled ZBL-08 «Snow Leopard» infantry fighting vehicles, ZTL-11 assault guns (with the same turret as the ZTD-5) and four-wheeled CS/VP4 Lynx all-terrain vehicles. These can swim to shore too, but more slowly at 5 mph, meaning they would do so after the tracked battalions secure a beachhead.

Each brigade should also have an air assault battalion (i.e. infantry landing by helicopter) and a reconnaissance battalion specialized in intelligence gathering and raiding missions.

For combat support, each brigade has an artillery battalion with 18 PLZ-05A amphibious self-propelled howitzers, and an air-defense battalion that can provide low-altitude air defense using man-portable missiles and towed anti-aircraft guns. These can even be deployed on shipdeck to provide low-altitude defense when transiting.

While the above organization serves as the template, in reality the six Marine infantry brigades aren’t standardized. Newly converted brigades lack a full complement of armored vehicles, supporting sub-units, and dedicated sealift.

In November 2021, Kennedy estimated the PLANMC could operationally deploy only six of its theoretical 12 amphibious mechanized battalions. Currently, there remains an emphasis on improving battalion-level leadership, as many battalion command staff remain unfamiliar with the capabilities of their units.

The same is true of the new Aviation Brigade, which in 2021 had just 20 air-assault helicopters in two squadrons — a mix of Z-8 and Z-9 helicopters, which are based on French Super Frelon and Dauphin helicopters. This unit has trained for ship-board operations from Chinese Type 071 and 075 amphibious carriers, as well as air-assault insertion of troops behind enemy lines, but it lacks attack helicopters for escort.

It is, however, integrating Z-20 transport helicopters, which are based on the US Black Hawk, and it could eventually include Z-10 attack helicopters.

Finally, the 3,000-strong, Hainian Island-based Seventh Brigade, formerly the Jiaolong («Sea Dragon») commandos, is a special forces unit trained in demolitions, target reconaissance/designation, and sabotage. It can deploy by helicopter, parachute, submarine, and inflatable raft. China’s Navy SEAL-equivalents, they have operationally deployed in China’s anti-piracy patrols off Somalia and during foreign-national evacuations in Yemen.

The PLANMC would play an important role in what is called the Joint Island Landing Campaign, or JILC.

The campaign would be a high-cost, high-risk endeavor, and thus far from Beijing’s preferred approach to dealing with Taiwan, even in the event of kinetic hostilities. Nonetheless, it’s the PLA’s job to make sure that option is credibly on the table.

However, PLANMC brigades don’t have the numbers or firepower of the ground forces’ amphibious brigades that are specifically equipped for a JILC contingency. Thus, Kennedy believes PLANMC units would be assigned secondary landing areas, seeking to «force defending forces into a passive position and complicate their ability to mass force against the heavier landing forces in the primary landing areas.»

Even combined, Ground Forces and Marine amphibious and airborne forces couldn’t conquer Taiwan by themselves. Instead, they would have to seize and hold beachheads and/or port facilities through which non-amphibious PLA forces can pour in.

The JILC would play out in three phases according to Kennedy.

Such amphibious raids, likely aided by helicopter and maritime militia units, can be conducted by PLANMC reconnaissance battalions, and possibly battalion recon platoons, and are the core function of its special forces brigade.

Such activities, however, risk betraying tactical surprise, so PLANMC units might also raid the wrong beaches in order to misdirect defensive efforts and sow confusion.

Kennedy notes the subsequent Assembly, Embarkation, Transit phase will be complicated by the PLA’s lack of sealift to transport all of its amphibious forces at once.

To ease the logjam, civilian ships could be converted into troop carriers, and the PLANMC might also embark at sea. PLANMC units have also demonstrated capability to launch amphibious vehicles from civilian roll-on-roll-off cargo vessels.

During embarkation and transit, PLANMC units would be vulnerable to medium-to-high altitude air and missile attacks — a subject of recent concern in Chinese media — and would likely rely on shore-based defenses for protection.

The Assault Landing/Beachhead Establishment Phase would likely involve five to seven separate waves for a single battalion, according to Kennedy. Each amphibious battalion would land on a beachfront 1 to 2 kilometers wide, meaning the entire brigade would occupy 2 to 4 kilometers.

In the first wave, combat engineers accompanied by specialized amphibious breaching vehicles would wade forth to clear corridors through minefields and obstacles using line-cable charges.

Infantry companies would follow in the second and third waves, followed by artillery and rear echelon units.

Even with a beachhead secured, PLANMC units would remain in the thick of the action. The wheeled vehicles of its light mechanized battalions could advance rapidly inland using Taiwan’s extensive road infrastructure.

Furthermore, PLANMC air-assault battalions could be used to insert troops 9 to 37 miles behind enemy lines. According to Kennedy, a single wave of five or six Z-8J helicopters could carry an infantry company, and would require an open landing zone of 1 to 2 square kilometers.

Overall, China’s new-pattern marine brigades appear designed to offer a flexible toolkit of capabilities, rather than providing maximal firepower for a Taiwan assault. As such, these units may constitute more of a handy strategic dagger, as a PLANMC commandant once put it, than a broadsword.

Still, in a JILC operation, the PLANMC’s reconnaissance and special forces units would be uniquely effective for pre-landing reconnaissance and raiding. And its mechanized and airborne battalions might be used for smaller-scale air/sea landings intended to outflank main beach defenses and capture sensitive rear-area positions.

Sébastien Roblin writes on the technical, historical and political aspects of international security and conflict for publications including The National Interest, NBC News, Forbes.com, War is Boring and 19FortyFive, where he is defense-in-depth editor. He holds a master’s degree from Georgetown University and served with the Peace Corps in China. You can follow his articles on Twitter.